How to connect to a no-remote server with Drupal CMS

Problem/Motivation
I am fairly new to Redis. So far I have only used it locally with the Redis module of the Drupal CMS and the local MAMP PRO server which has PhpRedis already installed). I am turning to you because my hosting service recently added with a little extra payment an already active “basic Redis server” (the support service pointed out that it is not a remote server, the host address is redis.mysite.com so it should/could be a subdomain space). These are the indications I got from the host:

The Redis server has its own control panel

I tried configuring the Redis module, trying to use it only as a connection and leaving out the parameters for caching that should be delegated to the site’s Redis server, but of course it doesn’t work. What prompted me to try to connect with the module (despite the module claiming to be for local or remote connections) is that the host provides a very simple procedure for Joomla that seems to use a module/plugin:

Blockquote
To use redis in your joomla 4 installation, simply follow the steps below:

Alternatively, the host provides a sample script (without specifying for which platform) to connect to and manage Redis, but I don’t know, if that were the only way, how to implement it in Drupal. 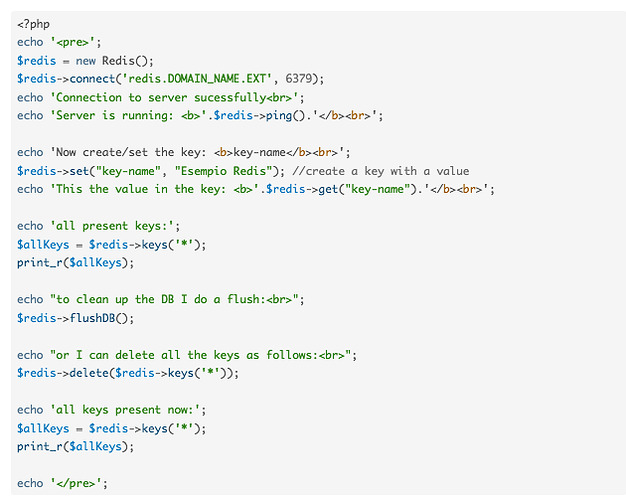 I’ve tried entering these parameters in the site’s settings.php file but it doesn’t work.

I am not a programmer, so I am a bit bogged down between having Redis available and not being able to use it. The host presents it as an “easy task” to connect to the Redis server, but I can’t figure out how to do it. I am looking for a good soul to help me get out of this, even paying the trouble if necessary. At least that way I will learn too.

Thanks to those who will read and can help me