Performance degradation after Redis upgrade from v3.2.12 to v7.0.4

Centos 7.7
I have tested many times with
redis-benchmark -n 1000000
And have results like this: 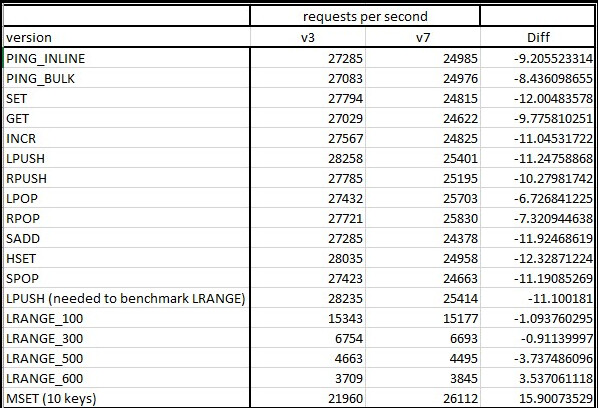 Why performance degraded after upgrade?

@Anton assuming you’re seeing ~10% performance degradation even without benchmarking both version I can tell you that there is an expected overhead due to payload sanitization and also due some features/fixes that were added in the between.
You can see in the comment of the following link the overhead of this required feature. That one is present as of version 6.2.
Furthermore, on version 7.0, we’ve added some extra features that as expected cost us some more CPU:
The following 7.0 features are know to take some CPU as explained in issue 10981

Notice that in the same manner that we’re adding more logic to Redis we’re also trying to optimize as well whever we can. There are use-cases in which the performance deeply improved from old to new version ( like streams, lists, etc… ). With that said: